After completing a dog pencil drawing of our new rescue pooch, Ozzie, I was commissioned to create a pet portrait of Louis, another Cockapoo.

His owner sent me a collection of digital photos and asked if any of them would work as a coloured pencil drawing.

The photos I was sent included those shown below. Although sweet photos, they weren't ideal for using for the dog portrait reference for various reasons. 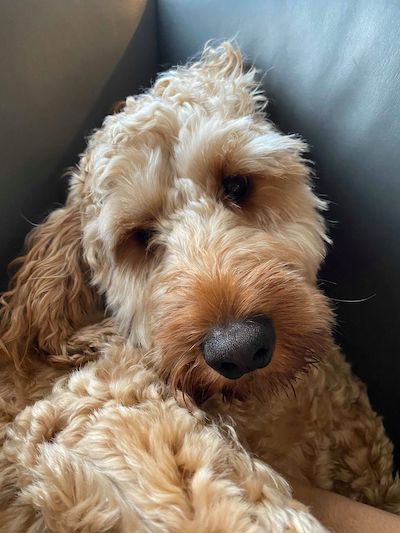 We can only see one ear
in this photograph 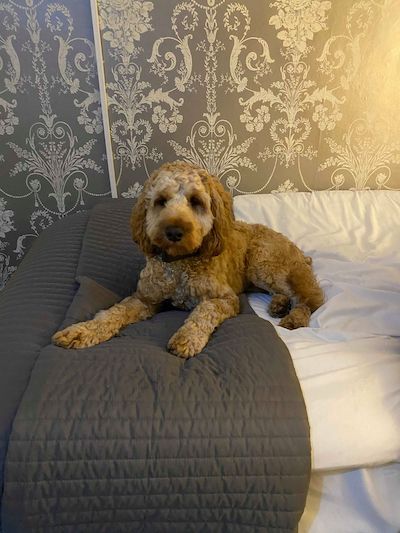 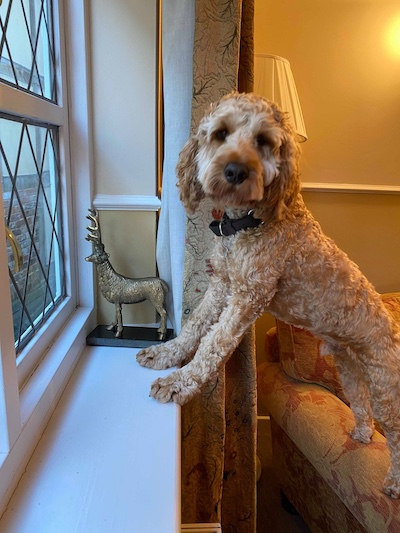 Face is blurred
and there is mixed lighting

As the client wanted just the dog's head the two on the right were ruled out as the focus was off and the head did not take up enough of the photo. The lefthand shot was sharp, close up and detailed, but he had one ear tucked out of sight and this may have looked odd when drawn.

One in particular stood out for me, so after cropping it down to the area that I considered would work, I got approval to start drawing him. 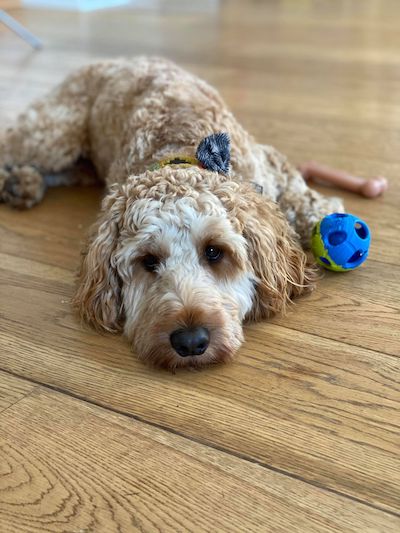 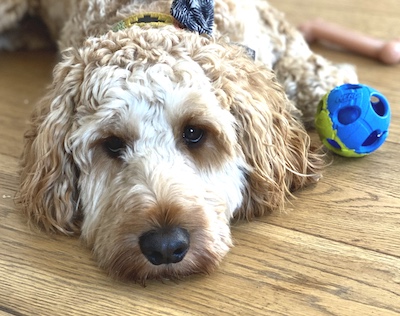 The original photo and the area I cropped to use as the reference for the dog pencil drawing.

As Louis loves balls I kept that in, but didn't include the bone in the background.

As always the first step is to decide what type and colour of paper to use for the hand drawn dog pencil portrait.

A compromise has to be made regarding the amount of pencil pigment the paper will hold and the texture of the surface. The smoother papers allow sharp details but won't take as many layers of colour.

I first picked a sanded board in brown to test, but soon decided that was not going to give the soft, fluffy texture of the fur that I wanted. I eventually settled on a medium texture white paper called Stonehenge. 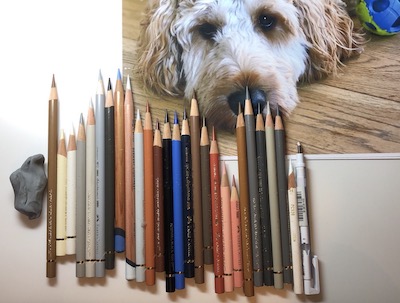 Next my pencil tins were the focus of my attention. I picked out potential colours from the different brands that I normally use. Each brand has different colours and qualities. Some are soft and buttery, while others are firm and keep a good, sharp point. I selected around 26 pencils as a starting point, knowing I would likely add more as I went along.

When drawing with coloured pencil it is rare to find the exact colour you need in the tin. Even areas that appear black are not completed with one pencil. Instead multiple layers of different shades are built up to give depth and variation to the tones. This is time consuming but results in capturing those multifarious tones present in nature.

Also in the photograph are my kneaded eraser for lightening areas and my tombow mono. The tombow is used more as a drawing tool than an eraser, being ideal for stroking in light hairs after laying down a general tone in an area.

During the early stages it is important to plan your composition and decide what is going to be included in the dog pencil drawing in addition to the pet itself.

The ball was a "must" in this instance and unless Louis was going to look as though he was floating in mid air some indication of the wooden floor was necessary.

I chose to tackle this as a vignetted background rather than filling in the complete area of paper. I also kept the tones light so that the floor did not steal attention from the dog.

In the photo the body and front leg of the dog was slightly out of focus. I chose to exaggerate this soft, blurry effect so that the eye was not led to that area but stayed on the dog's face.  I also used cooler colours and less contrast here for the same purpose. 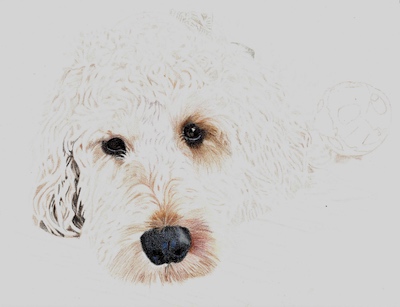 I start by drawing the eyes and nose

When drawing living things I always like to start with the eyes. If I don't manage to capture the expression then I know I won't be happy with the portrait and I start over. I wouldn't want to have the rest of the dog drawn and then mess up on the eyes!

The eyes usually contain one of the darkest tones in the artwork so they also serve to guide me as to how dark to go in other areas. In this piece I also chose to complete the black nose at this stage.

As I am right handed, I then move to the left and work the rest of the drawing from left to right, mapping in the basic structure. This helps to prevent my hand from smudging the work.

I like to take photos or scans as I progress through my portraits, some of which I share with my clients if they wish to see them. Some people like to be surprised at the end, but it is helpful to know whether I am on track and the client is happy from the early stages.

Partly drawn portraits can also verify that the finished piece is a drawing and not a photograph as someone once insisted on seeing the finished work! 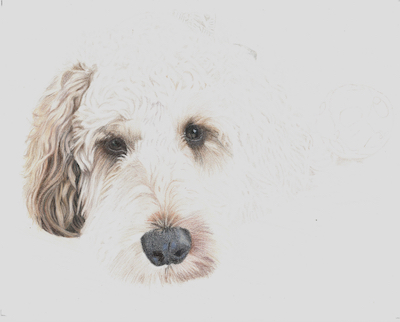 Working on the curls in the left ear

At these early stages the layers of paler colours are only just visible, so the scans often need to be adjusted so that the work shows up! This can make the paper look grey but it gives an indication of the progress. In this second scan the left hand ear is under way, and the curly fur is beginning to emerge from the paper.

It is important not to rush these early stages, and build the layers slowly. If I press too hard with the pencil it limits the amount of layers that the paper can hold as the surface becomes shiny and slick giving the pigment nothing to grip on to.

There were various different fur textures in Louis's coat. Soft fluffy curls on his forehead, longer locks in his ears, short straight hairs around his nose and that blurred body in the background. Each needed different treatment. 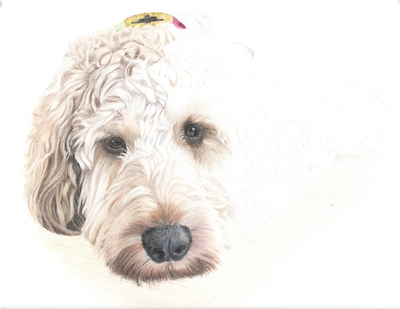 Adding more curls to the face and forehead

It really isn't necessary to draw every individual hair unless the dog pencil drawing will be life sized!

It is also not essential to depict every curl exactly according to the reference photo. But getting the main sections in the right place and laying in the right direction helps to depict "that" dog and helps to make it recognisable.

Clumps of hair do not have black outlines around them in real life, so the boundaries of each one need to be suggested in other ways. If, as in this case, the fur is light in colour, drawing the spaces in between the clumps is often my starting point. Laying the drawing on a light pad is useful here and allowed me to see through to the printed photograph underneath. I could then lightly map in those spaces.

Fur is made up of lots of layers, and locks lay over the top of others, creating shadows on the lower levels. Getting these darker tones in place shows where one hair overlaps without needing an outline.

At first glance the photograph appears to show Louis having lots of white fur. A closer look reveals that there are in fact many gentle hues within each curl and very little white. Even a light layer of coloured pencil will show up on white paper to add that variation. I did use a white pencil, but not in great amounts on this dog pencil portrait.

As mentioned previously I didn't fill in the entire background in this coloured pencil drawing. Some floor was essential to give Louis something to lay on, and the shadow under his muzzle and ears also helped to "ground" him.

The ball could also be considered a background element even though it is brightly coloured, as it is not a part of the dog itself. This spot of colour is balanced by including a hint of the collar and bow.

Part of the body is rendered as a soft out of focus area to make sense of the dog's pose. This also contrasts with the sharper details in the ball.

The corners of the portrait are left blank, keeping the attention on the dogs face. 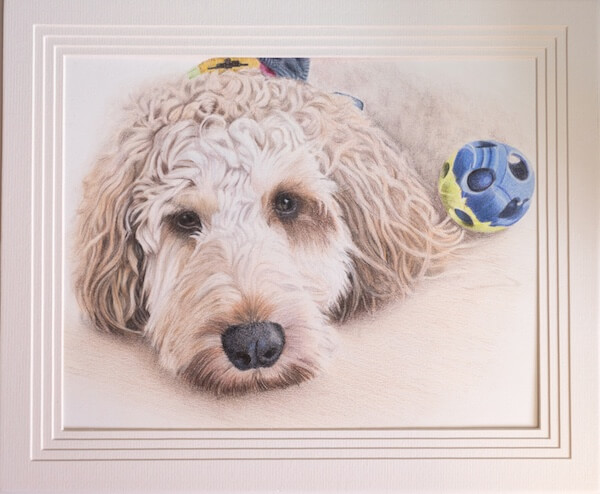 On sending the last scan of the finished piece to the client, she replied to say her son had stated it could not be a drawing and instead was a photo! He was also keen to guess the total number of pencils used and was surprised to discover that it was 75!

The client was delighted with the finished result.

If you would like me to create a dog pencil drawing, either in coloured pencil or graphite, for you why not use the contact form to get in touch with me and we can discuss your requirements.