What better gift for a cat owner than a personalized cat pet portrait? Whether you treat yourself or commission artwork for a friend or family member, having a portrait of a special fur baby will surely bring a smile.

If you are contemplating having a portrait created, make sure you take lots of photos of the pet that clearly show the features and texture of the fur.

My pencil portraits are based on your photos, and it is hard to recreate what isn't visible. If all you have is a photo of the cat's back end, it won't be possible for me to draw those beautiful eyes! If I have to resort to imagination the drawing will not be an accurate representation of the pet. I have a page that shows how I chose the best photo for a portrait (although it is for a dog on this occasion) which may help you pick out good pictures.

Whether you opt for full colour or traditional black and white, I love capturing that special something that makes the cat in your photo unique. A close-up will show off their expression and facial markings, while a full-body drawing will highlight a favourite pose.

If you can, try to hold your camera at the level of the cat's eyes rather than looking down from a standing position. This will prevent distortion and give the best angle of view.

If your pet is no longer with you, don't let the loss stop you from having a custom pet portrait created if you have photos. Remember, pets are family members and deserve a memorial of their very own.

Many of my clients' cat portraits are surprise gifts, but I have been able to include a few below.

Leo the marmalade and white cat

He is a smart ginger and white fellow and the apple of Penny's eye. This was drawn from a phone snapshot which was actually a great portrait when I eliminated the background. Unusually for indoor shots, the lighting worked well, as the shadows and highlights helped to give form and shape to his facial structure. Without the benefit of colour it is helpful to have side lighting, as in this portrait, to help show that the chin, cheeks and nose come forward from the rest of the head.

Although much of the fur appears white, very little of this drawing was left as bare paper. A very light layer of graphite was laid over all but the highlighted areas on the bridge of the nose and the edges of the cheeks and chin.

The shades of orange fur were depicted with softer grades of graphite which give a darker tone. 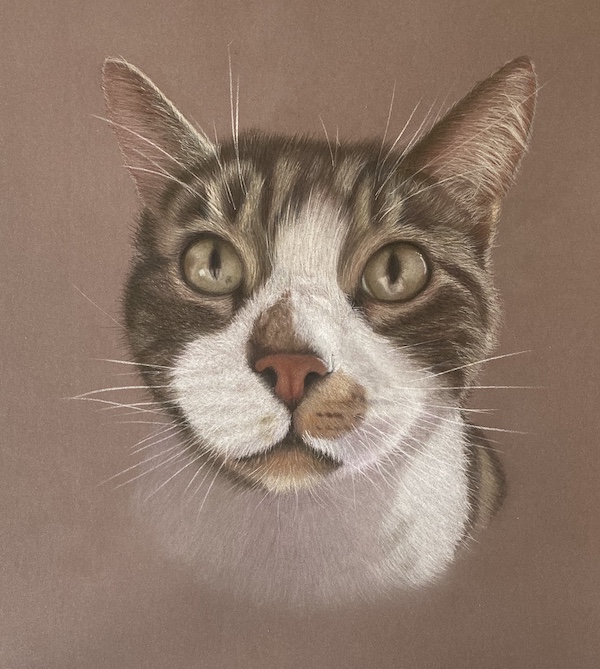 The owner's mother commissioned this painting of Rollo as a birthday present.

This was one of the occassions when I was sent lots of photos, but they were taken from the daughter's Facebook wall as the cat pet portrait was to be a secret so it wasn't possible to ask for the originals (which would have been higher quality).

At first, I was asked if I would remove the blemish in Rollo's eye as they had appeared with age. However, after some discussion, we decided to leave them in to depict him as he was at the time the photo was taken.

As the phone had been held close to his face, there was some distortion, but in this instance, it emphasized his character, so we decided to keep it as per the photo.

This was a large drawing and therefore I was able to include more detail than when drawing Henderson, below.

The daughter, Jade, was delighted with the results and the portrait now has pride of place on her wall.

Below is the photo that I worked from for Rollo's portrait. 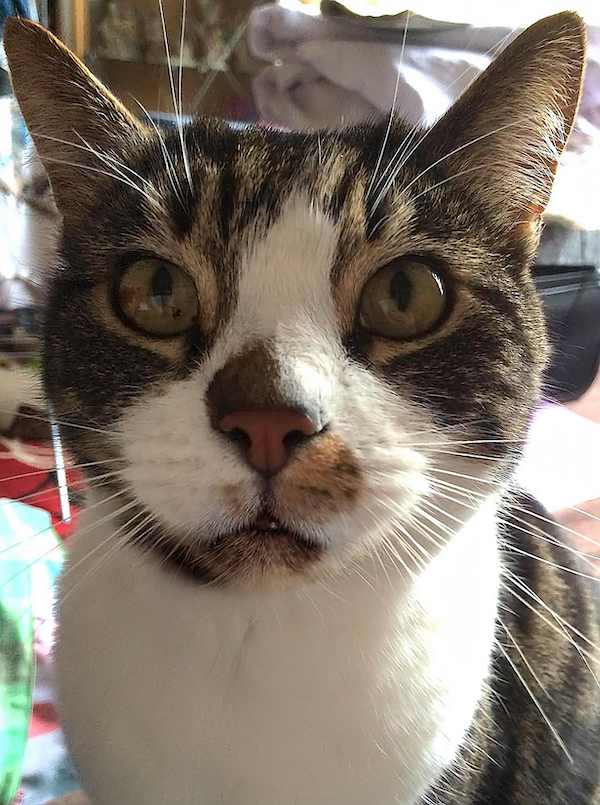 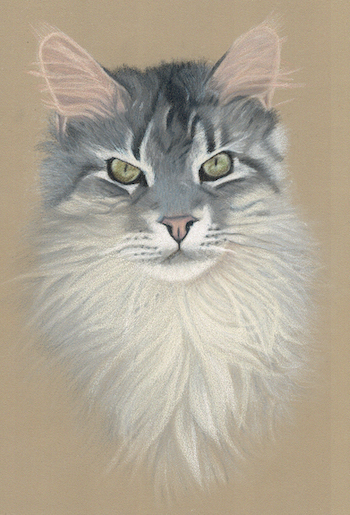 Henderson, a memorial portrait of a beautiful Maine Coone

Henderson was a Maine Coone belonging to my client's neighbour. Sadly he was taken much too soon, leaving devastated owners.

Not being their cat and wanting the portrait to be a surprise, my client could only provide me with one snapshot. It was a lovely picture but taken from quite some distance, leaving little detail for me to work from.

I wasn't happy with my first attempt so restarted. The second portrait was more successful considering the reference image and the small size of the drawing.

The completed work elicited happy tears not only from the cat's owners but also from Rob, who commissioned it.

...is simple. Contact me by using this form, and I will reply back. You will then be able to send me your photos which we can look through to choose the best one to base your portrait around.

If there are any particular elements you want me to include or eliminate once we have decided on the pose this is the time to let me know. For example, your pet may have a tattoo in its ear or a distinctive white patch which I might mistake as a flash highlight and therefore ignore.

If any of the colours do not look accurate in the chosen photo do share that information as well. If you have another photo that shows the colour better do send that along with an explanation.

Then confirm the size and whether you want graphite or coloured pencil. I will then ask for a booking fee, which will normally be half the final price before I start work.