Commissioning a cat drawing in graphite, or colored pencil, will give you a precious portrait to hang on your wall and view for years to come. After all, your kitty is as much a part of the family as anyone else that lives in your home. 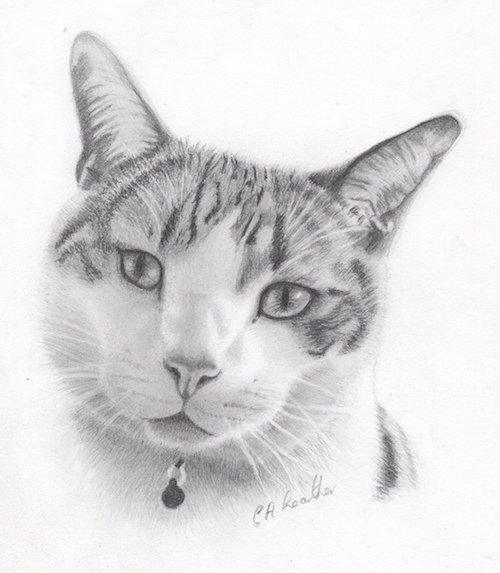 This ginger and white cat is named Leo, and is Penny's pride and joy.

She provided this photo, taken on her phone camera, and asked me to draw him for her.

Although it was not a high resolution photograph, there was enough detail in the white areas to enable me to create the portrait shown above.

The background was not necessary for this vignette. What was important was to accurately render Leo's markings, so it was his portrait not just a generic marmalade and white cat. 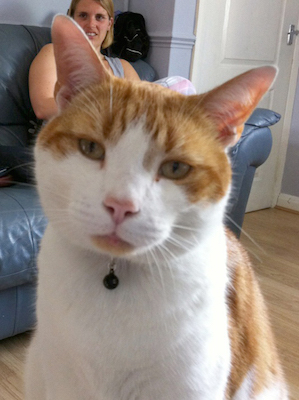 This was the first animal with white fur that I had tackled in graphite, and as such was a valuable learning experience. The shading on the white fur needed to be distinct from the orange markings. The coloured fur had shadows and highlights of its own, as well as darker orange stripes within it. Each cat's markings are unique and if I got them in the wrong place the likeness to Leo would be off.

Although the photo had not been taken with a graphite portrait in mind, I was lucky that his white areas were set against the blue couch or wooden floor, making it easy to see where he "ended" if you get my drift. His whiskers were set against shaded areas of white fur so they were also easy to see.

The importance of the paper when drawing

I had picked a drawing paper made from 100% cotton for this cat drawing, as I had been using it successfully for colored pencil work previously.

I found out that the texture of the paper was not ideal, but by then I was already part way through the portrait and it was too late to start over.

It held up to the inevitable erasing throughout the drawing process but I decided that for subsequent graphite drawings of cats, dogs and especially people, I wanted to work on a smoother, heavier surface.

If you would be interested in a portrait of your own pet, why not use the Contact page to drop me a line and we can discuss your requirements. 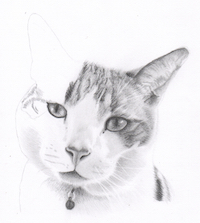 Getting started on Leo's portrait 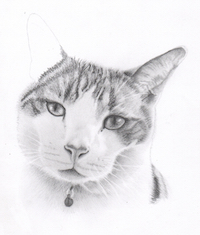